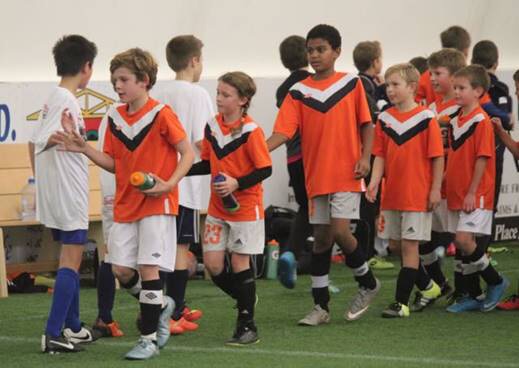 Our Development Teams were both in action this weekend as we took the road trip to Vernon for a couple of great matches at the Vantage One Indoor Soccer Arena.

Our U10s played first in a match up with a U11 Vernon boys team. Our team enjoyed large spells of possession right from the start of the game. Our players showed their quality as we passed the ball confidently around the field and began to create goalscoring opportunities. The first one came from Sam from the edge of the box, and further goals from Luca and Callum meant that we edged the match 3-2 against a stubborn opponent. Man of the match was Axl, in his new centre midfield position.

Next up our U12s played against Vernon’s U12 boys in what would turn out to be a very exciting game.

Vernon put a lot of pressure on our team from the start but we kept our defensive shape really well and restricted them to long range efforts and set pieces. Our team was always going to be dangerous on the counter attack, and so it was when Kai put us 1-0 up on a breakaway. From then, the game settled into a fairly even contest. Once the second came, following a close range effort from Jackson, we gained control of the match and began to look comfortable.

However, a very spirited late surge from Vernon brought them a goal to make it 2-1 and they pressed hard in the last few minutes for an equalizer. It was not to be though, and once again we counter attacked to add a third goal from Sam with the last kick of the game. Final score 3-1

Well done to all of our players and thank you to our friends in Vernon for hosting the matches !